A History of the Orono Town Hall

Walking into the Orono Town Hall, one steps back in time to the beautiful Romanesque Revival style architecture of Toronto Architect George Miller. Built in the Fall of 1898, it was quite a feat. The original town hall burnt down in the spring of 1898, and it was decided a new hall would be built. The grand opening for the new hall was March 1, 1899 at the cost of $5000.00

The Hall was originally the seat of the local Government for Clarke Township.  The lower level door to the south east, opened to the Clerks Office.  The office possesses a large walk in safe that held all the documents, and important papers of the Township.  It remained locked until the early 1900’s when it was opened and the contents moved to City Hall in Bowmanville.  The last clerk, Ed Millson, held his position for 30 years.  When Regional Government came to the province, the Town Hall lost its status as a government building.

There was also a detention cell in the lower level, only ever holding one prisoner; a Russian name Danzubach.  The Cell did host many transients who needed a place to spend the night.  It was removed from the hall in the early 1950’s.

In the year 1935 Mary Ann Harris bequeathed $1500.00 to the Hall, enabling the construction of what is now the clock and bell tower. 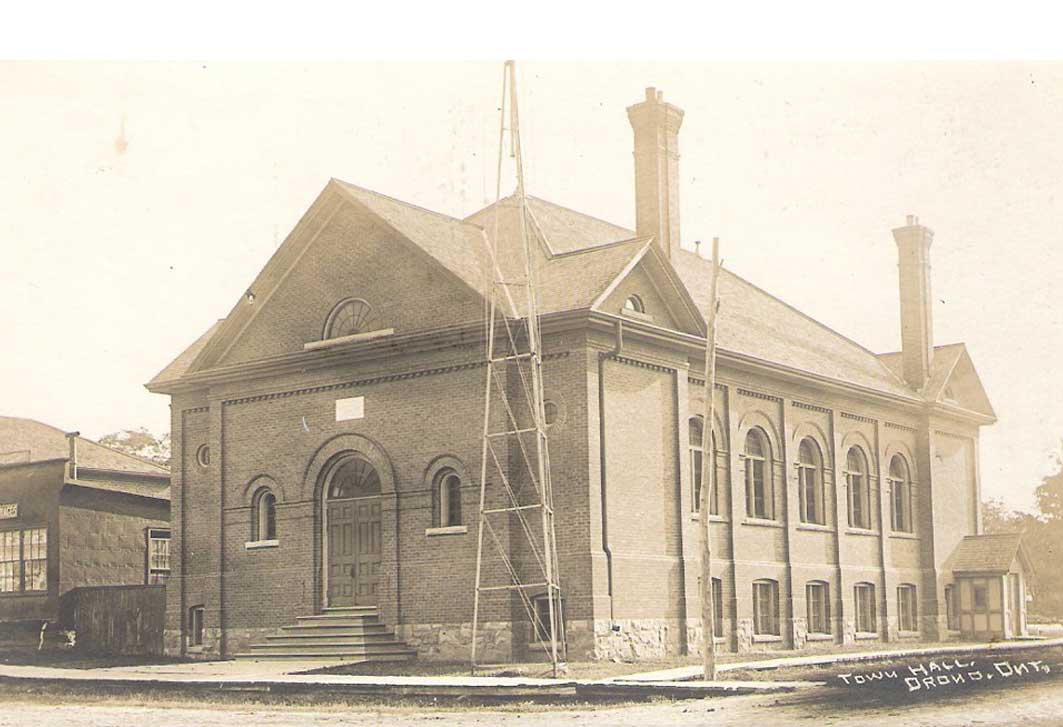 The Main level looks much the same as it did when it was built in 1898: The wooden ceilings, wainscotting and pine floor entrance; the balcony with its tiered seating, still with its collection of the original chairs; all overlooking the beautiful stage.  Having excellent acoustics, the hall has hosted numerous Concerts, School Plays, Graduations, Band Festivities, Christmas Carol Sing Alongs, Clarington Concert Band, Guitar Showcases, Piano, & Violin Recitals, also Breakfast with Santa, Something Unique Craft & Artisan Show, Local Art Shows, Doors Open Clarington and Strawberry Socials.

The lower level has been used by the Gentleman’s Card Club, Auto Workers Credit Union, and The Orono Play Group.

Because the Hall retained its Victorian feel, it has been the site of a few Motion Pictures. The Dead Zone, First do no Harm, and Dracula 2000. Also, the television program Wind at my Back, filmed some of its episodes at this location. In this, the Hall has seen such stars as, Pauline Johnson, John Candy, Meryl Streep, Gerard Butler, Christopher Walken and Martin Sheen.

The Hall was mostly forgotten for quite a few years when a local citizen became a guiding force in the preservation of the hall. Ann Dreslinski was the Chair Person of the Hall Board for 20 years. Through her, money was raised such as the spaghetti dinner which has been an annual fundraiser since 2010.

The one hundred year anniversary event was planned in 1998, with the whole community taking part. A kitchen was added onto the hall in 2001, making the Hall perfect for wedding and community events.

The Orono Town Hall is considered the Heart of Orono and is such a beautiful addition to the quaint Village. For more information on Orono please visit the official Village of Orono Web site.

Historical dates and information were taken from :

Reflections of our Village
by Judy Climenhage
Pg 33 & 34 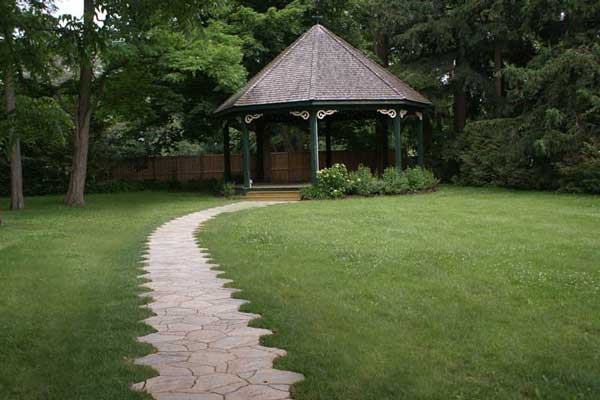 By: Sharon McCartney
Orono has always been a Concert town.

The first concert band was established in the early 1800’s. Then in 1898 Orono Built it’s first Victorian Bandstand. It was used until 1970.

In 1998 an Orono resident, Dave Climenhage, decided to re-create the Victorian Bandstand. In 2000, the Orono DBIA offered $2500.00 from it’s Main Street Millennium Funding. Within a month over $10,000.00 had been donated, and a beautiful Victorian style Bandstand came into being.

What is unique to Orono’s Bandstand ? The Weathervane is a Trombone. It is a 1940’s Olds Super made and used for over 20 years by Dave Climenhage, then generously donated to the Bandstand.

Information taken from: Reflections of our Village
Victorian Bandstand by: J. Climenghage pg 80 -81.

Once the Bandstand was built it was at once used for “The Great Canadian Band Festival” & Canada Day Festivities. Unfortunately the Band festival is no longer take place. Many weddings have been hosted at the Orono Gazebo.

The lovely flagstone walkway was installed in 2012. 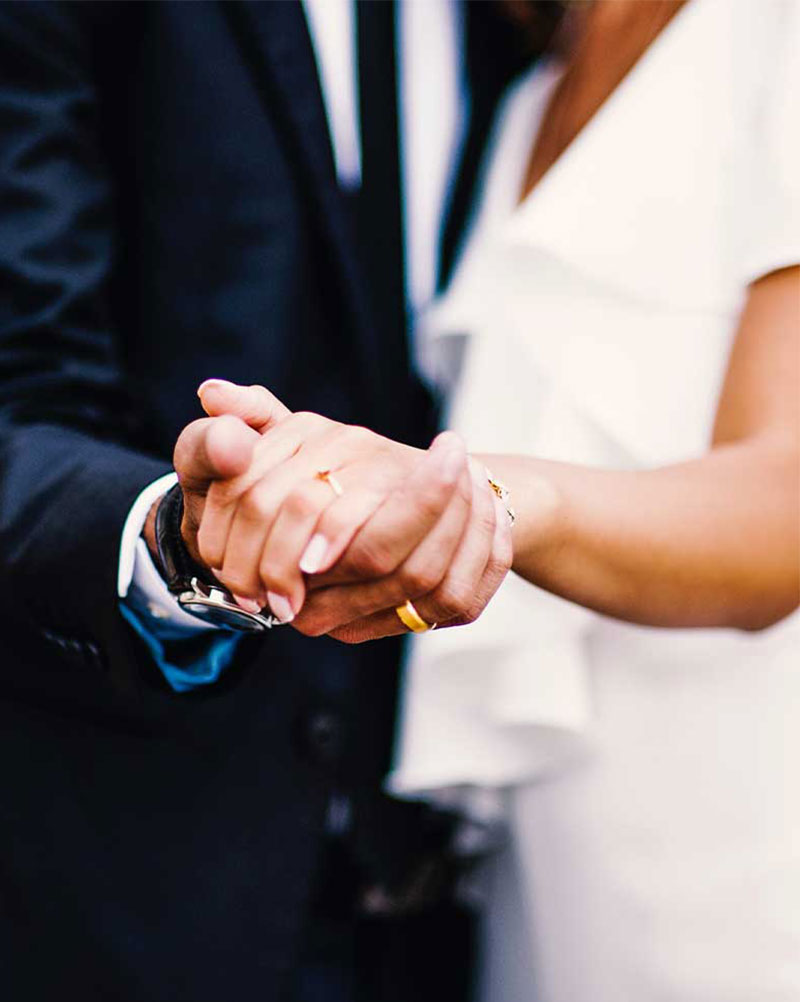 The Orono Town Hall is Perfect for

We use cookies on our website to give you the most relevant experience by remembering your preferences and repeat visits. By clicking “Accept All”, you consent to the use of ALL the cookies. However, you may visit "Cookie Settings" to provide a controlled consent.
Cookie SettingsAccept All
Manage consent

This website uses cookies to improve your experience while you navigate through the website. Out of these, the cookies that are categorized as necessary are stored on your browser as they are essential for the working of basic functionalities of the website. We also use third-party cookies that help us analyze and understand how you use this website. These cookies will be stored in your browser only with your consent. You also have the option to opt-out of these cookies. But opting out of some of these cookies may affect your browsing experience.
Necessary Always Enabled
Necessary cookies are absolutely essential for the website to function properly. These cookies ensure basic functionalities and security features of the website, anonymously.
Functional
Functional cookies help to perform certain functionalities like sharing the content of the website on social media platforms, collect feedbacks, and other third-party features.
Performance
Performance cookies are used to understand and analyze the key performance indexes of the website which helps in delivering a better user experience for the visitors.
Analytics
Analytical cookies are used to understand how visitors interact with the website. These cookies help provide information on metrics the number of visitors, bounce rate, traffic source, etc.
Advertisement
Advertisement cookies are used to provide visitors with relevant ads and marketing campaigns. These cookies track visitors across websites and collect information to provide customized ads.
Others
Other uncategorized cookies are those that are being analyzed and have not been classified into a category as yet.
SAVE & ACCEPT